Dr. Park attended Korea University in Seoul, Korea and received his B.S. in Genetic Engineering. After graduating from college he completed a 2 year traditional apprenticeship under Master Hyun Kyu Choi as a full time apprentice studying Acupuncture and Traditional Oriental Medicine. He started practicing acupuncture and herbal medicine in Korea through volunteer work since 2003. 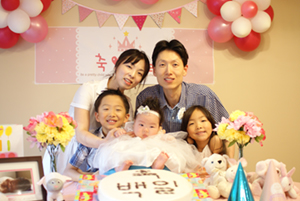 I was born in Seoul, Korea where I grew up with my parents and two younger brothers. When I was in elementary school my father decided to go to graduate school in the US to further his study in mechanical engineering. As a result our family moved to St. Paul, Minnesota and spent about 4 years there. I attended elementary school and middle school (4th grade through 7th grade) and during that time I developed a great interest in biology. As I got older it led me to study Genetic Engineering in college.

I grew up to have a very science oriented mindset and Chinese Medicine to me was nothing more than a prehistoric folk medicine ready to become extinct. That stereotype changed in my early 20’s when I was serving in the Republic of Korea (ROK) Army. I accidentally saw a television series on Traditional Chinese Medicine. It explained in detail about the theory and philosophy behind Chinese Medicine and its clinical results. It opened my eyes to read books on various topics and to actually experience an Acupuncture treatment. Eventually, I became an acupuncturist to practice Chinese Medicine as a profession and to make a difference in people’s lives.

During my time off, I enjoy spending time with my wife and three children. We have a 13 year old boy, Gene, and a 10 year old girl, Yoon, 5 year old girl, Lynn, who are our angels!

Being able to help people in their quest for optimum health through Chinese Medicine has been and always will be a very rewarding experience. I feel very fortunate to have met and learned from many great teachers and mentors who have given me great confidence in practicing this medicine.

I look forward to serving you in your quest for optimum health.